This article will hopefully be useful to those of you whose Wedge is suffering from the veneers separating from the dashboard, centre console or glove box.My motivation for attempting to re-veneer the above components was the high prices quoted to have this done professionally, I have I believe achieved a more than satisfactory result having had no previous experience of completing such a task. With care, patience and by applying logic to the process involved I would encourage anyone with minimal experience to have a go!
Once the glove box, centre console and dashboard steel backing plates are removed the first task was to remove the old veneers, this was relatively easy on mine as the separation was quite bad in the first place, sliding a paint scraper between veneer and the steel substrate panel made this easy work.
Having removed the veneer it is obvious why the separation occurred, rust build-up between the steel panel and veneer causes the two to part company. At this point it is vital that all traces of rust and the old adhesive are removed so to attain a good bond between the new veneer and steel panels.
A rotary wirebrush and an abrasive flap wheel in a drill soon had the entire panel cleaned as good as new. Cleanliness at all stages of work is extremely important if the re-veneering is to be permanent. A good tip is to give all the components a wipe over with thinners before starting the project. 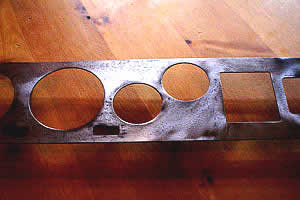 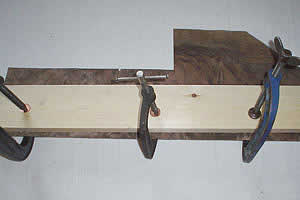 Veneers come in a range of different varieties of wood and thicknesses and this will depend on your supplier, the one I used was 0.7mm walnut burr veneer which seemed to closely match the TVR original.
Each veneer was cut roughly to size, I allowed approx 20mm over hang on each to allow for any slight misalignment, bearing in mind once the veneer has touched the steel backing using the contact adhesive method the two are not to be parted! Clean both steel backing and veneer with thinner to remove grease and grime to ensure a good bond, I used one good film of adhesive on the steel backing and two coats on the veneer, this was applied using a paint scraper and allowed 20-25 mins to set.
When this has been done the veneer is ready to be applied onto the steel panel, to help with alignment, I used a length of PSE from the local timber merchants which was slightly larger than the panel being veneered, lines were drawn onto the timber to give reference points for easy alignment of panel and veneer.
A clean and dry piece of card was held between the steel backing and veneer to avoid unnecessary contact between the two. Start with allowing a slight overlap between veneer and backing (this can be trimmed later) as the veneer is laid onto the steel backing with a roller, this gives a good firm pressure between the two and avoids air pockets being trapped in between. Once done sprinkle talc onto the exposed glued surface of the veneer so to avoid permanently bonding the veneer onto the ‚press‘.
Lay the veneered panel in between the two lengths of PSE and clamp then together with a firm but not excessive pressure using G-clamps and allow at least 24hrs for the adhesive to cure.
When cured, carefully release the veneered panel from the press, the veneer can now be trimmed to the panel using a sharp craft knife, change the blade on a regular basis to avoid splintering the veneer with a dull blade. When trimming always try to cut in towards the steel panel to avoid pushing the veneer away from the glued panel.

Take extreme care at this point as all your hard work can soon be undone, the prize for this is back to square one! A bit like playing snakes and ladders really!
Now comes the time for the final stages, the re-finishing, applying the tint and lacquers, I found this probably the most satisfying and rewarding part as at this stage you can really start to see the quality and depth of wood grain. 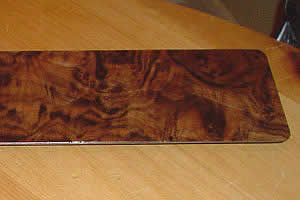 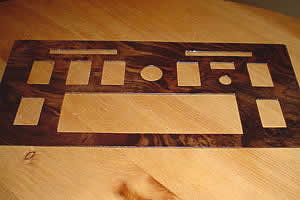 I did not tint the veneer as I quite liked the grain exactly as it was, however tinting can be done to your own tastes. Clean off any excess of adhesive from the veneer with thinners – use this sparingly and then give it a light flat over with a very fine abrasive paper. Take care not to flat through the veneer as its only thin. Apply 4-5 coats of lacquer allowing 20-25mins to dry between coats, this should be done using a good quality brush or sprayed, although spraying does give a better finish. 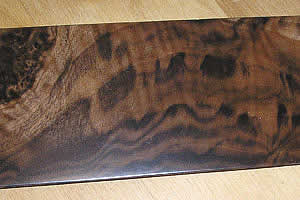 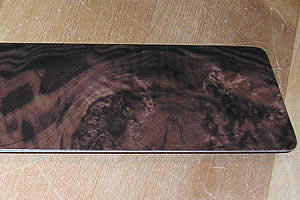 Once dry (I left mine overnight) flat back again with a fine abrasive to achieve a smooth surface, obviously try to avoiding flatting though the lacquer into the veneer, repeat the process another 2-3 times until the lacquer lays flat without any imperfections – this will give the grain depth and a nice deep rich sheen. I used a satin finish as this is what I preferred although you could just as easily also use a high gloss coat. 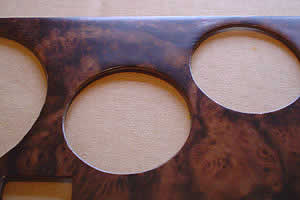 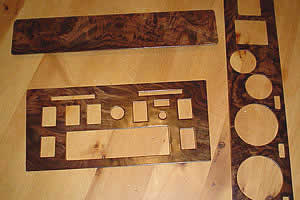 Any particles of dirt or dust that have fallen in lacquer can be polished out when fully dry. Before starting this project I researched in detail the process and procedures on the internet and in the library as well as the availability of the materials used for the task and I am more than happy with the results. So if you have the passion and patience, I feel anyone with a little practical experience and patience can achieve a satisfactory result and save you literally hundreds of pounds into the bargain.

Hope this may be of use to some of you who wish to restore your own dash and who suffer from the same unsightly view as I did.