‚It’s good to stop‘ – A cautionary tale on Wedge brakes

After taking recent possession of my all time dream car a TVR 450SE I soon realised why I had purchased it for such a competitive price – it requires a bit of work to bring it up to scratch! (I knew this before I purchased the car but as soon as I clapped eyes on it I had to have it). Anyhow it came with nine months left on the MOT so it could not be that bad – right?
A drive out around Mid Wales was organised by some local Wedge owners. The run was arranged for just after the Christmas holiday, although the car had not been particularly looked after very well by some of the previous owners, and had been stood for over a year I was confident that the car would make it to the run. The drive around some of Wale’s finest roads would also be a great opportunity to give the car a ’shakedown‘ to see what else was gonna fall off or stop working. During breaks in the rain that deluged most of the UK in the run up to Christmas I did not really have enough of an opportunity to get under the car and have a good poke around, so I decided to play it by ear and try the car anyway. 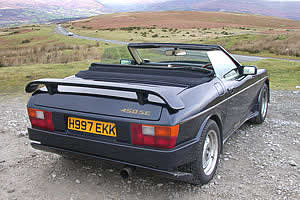 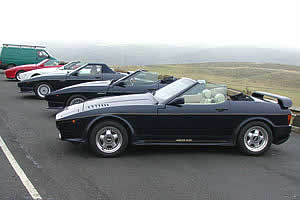 On the drive out to my surprise the car behaved perfectly not missing a single beat, everything seemed to work as it should, the sun was shining, the birds were singing and best of all, the roof was off – what could possibly go wrong? – Famous last words!
Nearing the end of the drive I started to notice that the brake pedal was starting to have less and less effect on reducing the velocity of the car. After some frantic pumping of the brake pedal we eventually stopped only to catch a waft of acrid smoke coming from the back end of the car. ‚Here we go, call the fire brigade my pride and is gonna go up in smoke on my first drive out in it‘ I thought. After a hasty impromptu roadside inspection it looked like the rear brake pads and disk assembly had overheated causing the grease on the UJ’s to burn off. The heat obviously also boiling up the brake fluid causing the loss of braking.
After letting the whole lot cool down for a good few hours I cautiously test drove the car around a nearby car park only to find that the braking had been restored – time to limp home quietly before anything else happens!
After getting safely back home I took the opportunity to get the car up in the air so I could investigate what had caused the incident. After stripping the front brakes I noticed that the front pads were very low – almost down to the bone. This had caused the back brakes (which were also probably covered in a layer of rust and crud due to the lay-up) to do more than their fair share of the brake work causing them to overheat. 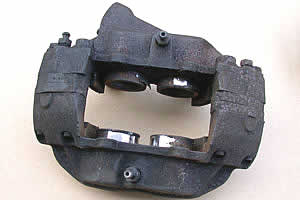 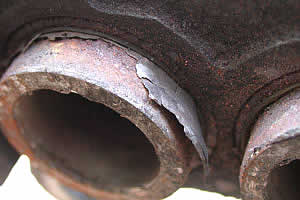 After stripping the front brakes further I found a more serious problem. The front calliper pistons were nearly fully extended due to the fact that the pads had next to no friction material left on them and the chrome was flaking off the brake pistons! Where the chrome had flaked there was a thick layer of rust forming around the bare metal on the piston shafts. It looked like the callipers were shot and had to come off to be repaired or replaced. 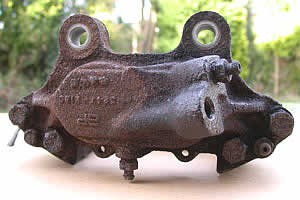 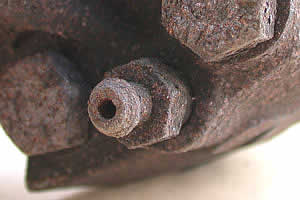 When removing the callipers it is important to remember not to let the brake fluid level drop too much in the reservoir bottle otherwise the system will dry out and you will have a hard time filling it back up again. To help avoid this, plugs were fashioned and clamped to the ends of the brake hoses and any lost fluid replaced at the filler reservoir.
Wedge brakes have never been one of the types strong points but on the larger Bigger and Badder Wedge cars at least TVR had a go at getting the braking better. The 450’s were fitted with thicker ventilated front disks and modified and widened Austin Princess four-pot callipers to help tame the beastie. The system although not up to the standard of modern production cars was an improvement on the 350i’s solid disk and two-pot calliper arrangement.
After some extensive nosing around on the ‚interweb‘ I managed to narrow my options down to the following:

Plan A
Replace the whole calliper, rotor and pad setup on the front for something more modern and sophisticated – the so-called ‚big brake upgrade‘. After ringing around the usual suspects for quotes, I came to the conclusion that this was going to be an expensive option. The only plus point was that the previous owner had already fitted braided hoses throughout the car so at least I did not have to pay for these as well.

Plan B
Purchase some new (if you can find them) AP callipers, have them altered with a spacer kit available from a company called Rally Design and in theory they should simply bolt straight on. The disks looked in fine shape, I would need to replace the pads and fluid so this plan could be a possibility.

After some more mooching on the internet it turned out that these callipers are getting like ‚hens teeth‘ and even if I could find them, the ones I did find for sale were going for silly money. I would also have to purchase the spacer and seal kit and cobble the whole lot together myself which I did not fancy doing.

Plan C
I could have my old callipers reconditioned and rebuilt, keep the disks as these were in very good shape, replace the fluid with something that could handle the higher temperature and change the pads for something a little more exotic.

After some ringing around to seek recommendations from other Wedge owners I decided to go for ‚plan C‘ and have them re-built. The chap I was recommended to speak to was from a company called Classicar Automotive based in Cheshire (http://www.classicbrakes.co.uk telephone: 01625 860910). The company has been established for over 17 years and specialise in British & European sports car brake systems. Dave the owner explained that after he had finished with the callipers, all I would have back from him that was original was going to be the calliper castings – absolutely everything else gets replaced with new.
The callipers are stripped down to their individual component parts, the main castings are shot blasted back to the metal and then zinc plated. The units are then rebuilt using brand new seals, bolts, liners, bleed nipples etc and new stainless steel pistons are fitted. After inspection, pressure testing and final quality approval the callipers are then returned. Total cost for two came to around ÂŁ130 including the postage and dreaded. Another benefit of using the original callipers was that as they were the original OEM TVR item they should bolt straight back on again with no adjustment or fuss, which in my mind was a real plus.

When they were returned about a week later they really did look like brand new – see the before and after pictures to see what I mean. The only trouble was it now showed up the rest of the underside of the car! [note to self: must paint chassis ASAP]. 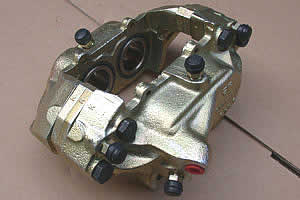 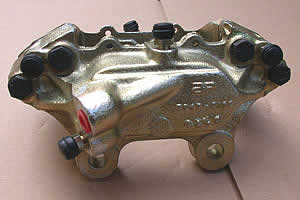 I also decided to up-rate the pads that I was going to fit at the same time. My selection criteria was that I wanted to have improved high temperature stopping power, I did not really want loads of brake dust to be generated and I did not want the pads to squeal excessively during braking (I leave that up to the wife!).
Eventually I decided on the Mintex 1144 compound fast road / race pads. Although I have also been recommended Ferodo and EBC Greenstuff pads it was the Mintex pads that consistently got the thumbs up from other Wedge owners. 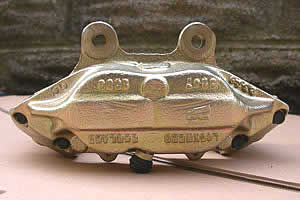 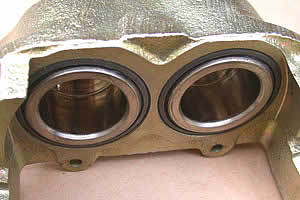 I purchased the new pads from Tim Lamont at ACT Performance Products (http://www.actproducts.co.uk telephone: 0870 7070110) who has recently became a Mintex dealer and is currently offering some good deals on brake pads. He is well worth a talk to if you are looking to do any work on the brakes. 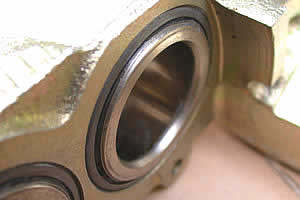 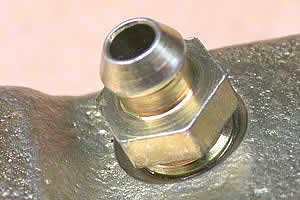 Another thing I required were the sprung steel brake pad retaining clips and extra long 98-100mm long split-pins to fit the widened AP princess callipers. Apparently these are quite hard to come by so I decided to go into ‚Mrs. Marple mode‘ and head off around my local motor factors armed with the rusty old pad clips to try and match these up. After many hours of looking at reference books and opening little boxes I managed to find a very close match to the ones used by TVR.
It turned out the calliper accessory ‚kit‘ for the AP widened calipers has to be made up of two separate brake fitment kits:- The extra long split pins – Apec Braking kit Number 427 and the metal sprung steel clips – Apec Braking kit Number 515. The pins from kit 515 and the clips from kit 427 will have to be binned however. I could not find one kit that did both unfortunately. ‚Apec braking‘ is the make that our local motor factors use and should be readily available. If your local guys don’t do ‚em the address for the manufacturer is:

The split pins were fine but the retaining clips in the end did require a very small amount if filing to be a perfect fit. The new clips had a very small 0.3mm ‚lip‘ at either end that had to be removed with a file otherwise they were a little tight. 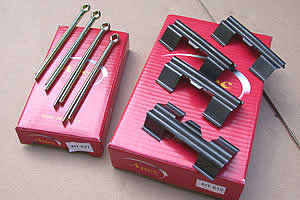 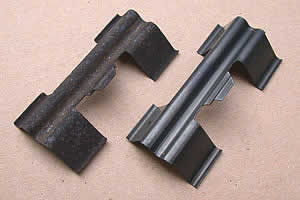 After I assembled all of the components I started to bolt the whole lot back together again, the pads were fitted with the additional help of a little ‚copperslip‘, the new fixing clips and split pins slid into place nicely. At the same time I changed the ‚Jaguar‘ pads in the rear axle with Mintex 1144 compound pads and bled the system several times using a pressure bleed system. The fronts had five bleed nipples a side but the backs only had one as the two sides were connected. Before the pressure bleed I let the fluid naturally gravitate through the calliper until the fluid started to drip out of each bleed nipple. 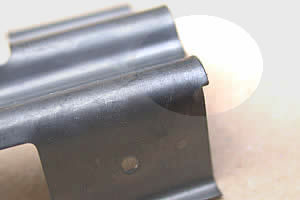 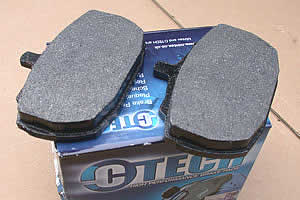 I opted for the pressure bleed system to help avoid any possible damage to the master cylinder caused by over extending the brake pedal whilst the bleeding procedure is carried out. I did not intend to change the rear pads as well but after the boiling brake fluid incident they did look a little ‚glazed‘ due to the heat and I thought I had better change them for safety’s sake and for peace of mind. 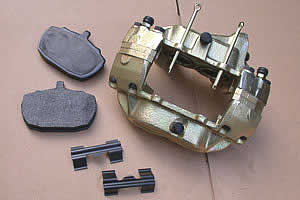 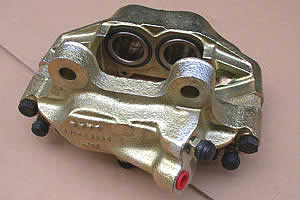 The bedding in procedure for the new pads is very important. Until the pads have worn to the shape of the disk, emergency stops should be avoided! But the instant improvement could be felt straight away. The car now grabs and stops one hell of a lot better than before, even the slight pull to one side under excessive braking has gone. I am very pleased with the improvement in feel and responsiveness of the brakes, plus the obvious safety improvement and best of all the cost!

So the moral of this story is, before hooning around anywhere in your classic TVR (especially a newly acquired one) get the wheels off and have a poke around at the brakes – it’s good to go but it’s better to be able to stop when you want as well.