I, like most owners of the older models probably do, have a list of things to do as long as your arm, striking them off as they are completed, and then adding a few more.
It was during a routine check over of the front pads and wheel bearings, that I noticed some play in the top steering UJ and a considerable amount of wear in the bulkhead bush. This needed to be sorted as soon as possible. I also had another job on my list that had began to irritate me more and more each time I went out for a drive, was the amount of free play in the steering column shaft to housing. Holding the wheel, I could move it from side to side and up and down by about 5mm! Some of this was just flex, but the rest was down to worn bushes in the housing. Time to sort these all in one go.
I obtained two new TR7 steering column bushes from Southern Triumph Services and obtained a nearly new TR7 top UJ from a chap I knew. From reading the Wedge forum on Pistonheads, the big stumbling block would be the bulkhead bush. This has been a topic raised a few times and, from what I could find, no simple solution was found. I could get a bush custom made at work and also make a mounting bracket to attach it to the bulkhead at the correct angle but I was sure I could find something off the shelf that would do the job, and after a little searching, found a bearing – SLFL3/4, which is a sealed selflube bearing and included a housing and looked ideal. This was ordered from RS components, but is available from most bearing stockists, and it arrived the next day. Time to make a start. 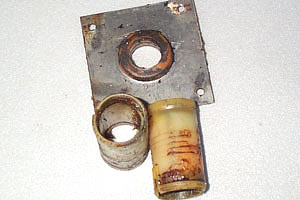 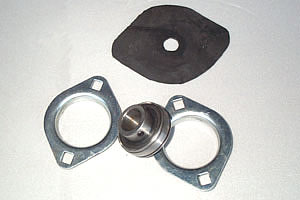 With the front end up on stands and the road wheel off, I slackened the clamping bolts on the top UJ. Next, was the removal of the steering wheel, the column shroud and the clamping screw for the stalk assembly. I found there was enough slack in the wiring to ease the stalk assembly back and over the end of the column without unplugging the loom. This was then taped out of the way. Two tiny screws and an earth connection released the wiring connector from the back of the ignition switch. I then refitted the steering wheel and removed the two bolts securing the column housing to the mounting bracket. I then used a large flat screwdriver tapped into the split part of the UJ to release it from the shaft. A pull on the steering wheel and the steering shaft was released from the UJ and the column assembly was out.

The bearing and its housing was then offered up to the bulkhead from the wheel arch, although I had planned to fit the bearing on the inside of the bulkhead. It was just easier to check this way rather than crawling in to the footwell. The hole left by the original bulkhead bush needed to be opened up to allow the bearing housing to sit flush against the glassfibre. I used a coarse flapwheel to do this and it only took about ten minutes with constant checking for size. The two mounting holes for the bearing housing were then marked and drilled through.
The column housing bushes came out quite easily with a length of steel tube used as a drift from each end. The new bushes were then fitted making sure the slots in the bushes were aligned with the indentations in the column housing. The new bearing for the bulkhead was a slide fit on to the shaft with the exception of having to locally remove some paint. It was then that I noticed that the original plastic bush had actually worn a slight groove in to the shaft. 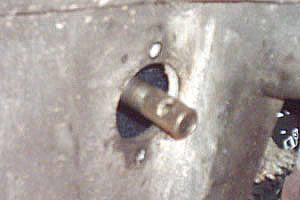 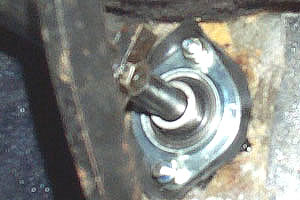 The new bearing covers about four times as much of the shaft compared to the old bush so this groove would not be of any concern. Although the bearing is a sealed for life item, it is directly behind the roadwheel so I decided to make a gasket of thin rubber that could be sandwiched between the bearing housing and the inside of the bulkhead. I cut a hole in the centre of the gasket that was smaller than the shaft so that it would be a snug fit. Reassembly was basically a reverse of the removal but you need to ensure that the new bearing housing is tightened evenly down to the bulkhead as it holds the bearing rigid but at the correct angle.
With everything back in place, checked and tightened, it was time to see how much of an improvement there was. And what a big improvement! The steering felt so much better. The whole car felt totally different. And this is before the rack gets reconditioned. Add to this that a great many of the rattles, clunks and squeaks had gone, and that all in all it only took about three hours to complete and cost ¬£15.00.

I am really pleased how this little project had turned out. Another one struck through on the list.