TVR wedge headlights can be a constant source of problems, especially the lift pods. I have seen some that do not work at all, I have seen one or two that only one light pod works and I have even seen a few that ‚wink‘ at you. 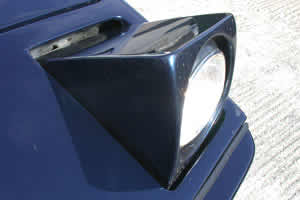 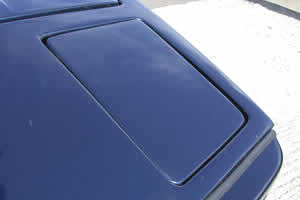 Light pod down
To alleviate the mystery that surrounds the lights, I will try to explain the operation, hopefully this will at least give you a fighting chance when yours go bang (or start winking!). Although the circuit diagrams and descriptions of the pod operation may differ slightly between different models of wedges, the basic operation as outlined will still be relevant.

Diagram 2 (TVR)
The dashed box on the circuit diagrams below represent the headlamp pod motor assembly, which is standard TR7 but without all the cast aluminium bits, springs etc that originally accompanied it!. For clarity, only one pod circuit diagram is shown; the connections to the other ‚half‘ of the circuit are indicated.
The diodes marked ‚Main‘ and ‚Dip‘ are connected to the appropriate fuses, so that when the headlights are switched on (either beam), a feed is provided via the diodes to the ‚Control Relay‘. The diodes themselves serve to isolate the Dip and Main beams from each other; if either diode went short-circuit then in theory, you could have both beams lit at the same time. However the amount of current taken by the bulb filaments would almost certainly blow the other diode as well!.
If both beams can be seen to light correctly, and the pods only raise in either Dip or Main position but not both, one of the diodes may have gone open-circuit.

With reference to the ‚LOWERED‘ diagram (above), both of the relays are shown in their ‚de-energised‘ or ‚Normally-Closed‘ position. The limit switch in the pod motor gearbox is held at the ‚F‘ position. A quick trace of the feeds from the +12V Permanent rail will show that the motor is not energised.

Now, when the lights are turned on, 12V appears at either of the ‚Dip/Main‘ diodes and powers the ‚Control Relay‘ coil. This relay then switches over as shown in ‚RAISING‘ (above), applying a feed down to the pod motor, through the diode and ‚F‘ side of the limit switch, back up to the ‚Pod Relay‘. This relay switches over and applies the 12V rail to the motor, which begins to raise the pod.

Once the pod has lifted, a ramp in the pod motor gearbox causes the limit switch to change over to its ‚W‘ position, interrupting the 12V feed at ‚F‘, dropping out the ‚Pod Relay‘ and turning off the motor. This is shown in ‚RAISED‘ (above).

When the lights are turned off as in ‚LOWERING‘ (above), the 12V feed at the ‚Dip/Main‘ diodes ceases, causing the ‚Control Relay‘ to drop out. This then sends 12V down to the pod, via the ‚W‘ side of the limit switch, back up to the ‚Pod Relay‘, turning on the motor (which only rotates in one direction; it does not reverse to retract the pod) and dropping the lamp into its recess. Once fully-lowered, the pod motor gearbox ramp lifts the limit switch back to the ‚F‘ position, interrupting the 12V feed to the ‚Pod Relay‘ and stopping the motor as before. The switches and relays are now back in the ‚LOWERED‘ condition. Knowing the cycle of operation, it is possible to fault-find on the headlamps fairly rapidly. The presence or absence of either main or dipped beam can be a clue as to whether the pod motors themselves are faulty: a defective ‚Lights‘ switch or column dip/main/flash switch can make it appear that the pods are faulty. Simply peering into the headlamp recesses to see if the headlamp bulbs are lit will help here!.